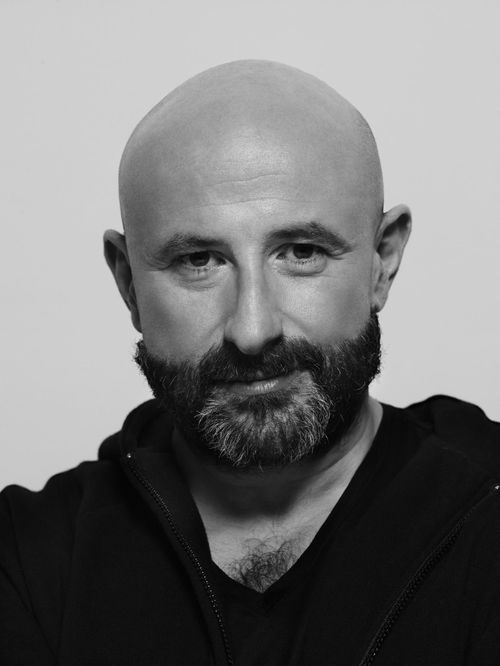 Laurent Dombrowicz is born in Belgium on the 6th of January, 1966

Graduated from INSAS (University for Theater and Film Industry, Brussels) as film director in 1987, he has started his career in fashion at the age of 23 as Fashion Director of the main weekly frenchspeaking belgian magazine Weekend L’Express

Between 1989 and 1997, Laurent Dombrowicz has worked, as stylist, for several publications

in Europe, such as Euroman, Squeeze, Attitude and the iconic french kingsized Jardin Des Modes.

He focused his work on the tension between art and fashion, using on a regular basis his knowledge of the Film History.

Discovering and highlighting new talents becomes soon his first priority. Laurent Dombrowicz has co-founded in 1997 and managed the company of Olivier Theyskens, his former assistant. In the very late 90s, he starts a 6 years work relationship with the belgian menswear designer Xavier Delcour, who defined his era with chic. In the last decade, he has worked as consultant and/or brand developer for the chinese born couturier Yiqing Yin and the for wonderkid from India, Manish Arora

As Global Fashion Director at CITIZEN K INTERNATIONAL/CITIZEN K HOMME SPORT, he develops his visions with a genuine and authentic point of view on fashion trends and photography.

Laurent Dombrowicz is also a writer. His texts have been published in three continents and his main contribution to this french title has featured interviews of the most influential or important fashion designers of the last decades: Rei Kawakubo, Marc Jacobs, Donatella Versace, Raf Simons, Miuccia Prada, Alber Elbaz, Giorgio Armani, Lucas Ossendrijver,  Tom Ford, Thom Browne, Tomas Maier and many others.

His work with womenswear is the total opposite of the famous but so oldfashioned “less is more” ethos, as Laurent is a sophistication-addict and refuses the laziness of the snap short esthetics. From Gucci to Rick Owens, he puts the fashion in a cultural environnement that translates both his taste and a very high level of exigence.

His work with menswear has another kind of energy, exploring the boundaries of excess and eroticism, with an edgy sense for casting. With the years, jewelry and beauty shots are also some of his favorite play grounds.

Since 2005, Laurent Dombrowicz is appointed by the luxury division of L’Oreal Group to present and develop analysis of the style trends, in order to explain, explore or establish new links between Arts, fashion and the cosmetics industry. Delighting the past, feeling the present to imagine the future, that’s his work, his passion.

Since 2013, Laurent Dombrowicz gives masterclasses and lessons at the parisian high school Atelier Chardon Savard for the next generations of stylists, fashion editors and PRs.